The Pain Is Still Big &
It Hasn’t Got Any Easier

It’s been five years since Hurricane Katrina slammed the Louisiana coast, drowning New Orleans, killing over 1,800 and leaving more than $80 billion worth of damage on its wake. It was one of the darkest hours among so many dark hours of the Bush administration.
Before any help was at hand, wave after wave pummeled the Big Easy and leveled some of its poorest neighborhoods. Entire city blocks were destroyed beyond recognition and remain covered in debris. A lot of what’s been known about the place may have disappeared for good.
Residents who could not flee the city in time 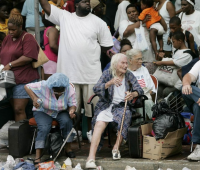 sough refuge in the ill-prepared Superdome and Convention Center, where soon enough they ran out of food, water and minimal hygiene. In fact, conditions were so unsanitary that the corpses of many who died there remained for days side by side with the barely living.
The reputation of federal agencies such as FEMA, which up to then had a clean record of efficiency, was ruined under the president’s personal friend Michael Brown, whose only prior professional credential was his past as a rodeo booker, and who’s still to take full responsibility for his omissions and mismanagement during the disaster.

The Coast and the National Guard, the other government agencies and countless anonymous volunteers all put up heroic efforts but lacked crucial resources needed in the aftermath of the landfall. Bureaucracy and a misplaced sense of pride prevented equipment and tools, such as portable toilets and water treatment systems, sent by other states and foreign nations, from ever reaching the victims.
And so on and so forth. The tragedy of Hurricane Katrina was more a consequence of insensitiveness of a president who refused to cut short his vacation time to show up at the scene of the devastation and lead the efforts, than the amounts of rainfall that fell over New Orleans.
48 hours before landfall, every meteorologist and weather expert in the U.S. suspected the city’s floodwalls and water levees would be under too much stress and risked being breached, and evacuation of the Lower Ninth Ward should’ve started then, not two days after the storm was already upon the city.

Today, thanks mostly to independent efforts, New Orleans seems to be experiencing a small recovery. The noble resilience of its communities, driven by the cultural vibrancy they city was always known for, are the main factors in the commendable accomplishments achieved. But it’s still far from what it was, even though, let’s face, the Big Easy has been plagued by poverty and indifference from the central government for ages.
Whole lower-income housing projects, which were evacuated during the storm and whose management prevented its residents back years after that, were quietly demolished to give away to big speculative real estate developments that are sitting mostly idly.
This time, the collapse of the U.S. housing market was the culprit du jour to justify thousands of square feet funded and built in part by public money, but still unoccupied.
It also remains to be seen

whether the rebuilt levees are capable to withstand another surge similar to Katrina’s. Many studies point to vulnerabilities in the Army Corps’ approach at fixing the broken walls and the new floodgates that were just installed around the city, as Harry Shearer’s documentary “The Big Uneasy,” for example, seems to show.
Whether the Obama administration will make good on its promises to help New Orleans come back economically remains to be seen. But the city also needs help preserving its cultural diversity, supporting its aging and poorest neighborhoods, and restoring its status as one of the most original and unique cities in the U.S. and the world.

Do you know what it means to miss New Orleans?
I miss it both night and day.
I know that it’s wrong… this feeling’s gettin’ stronger
The longer I stay away.