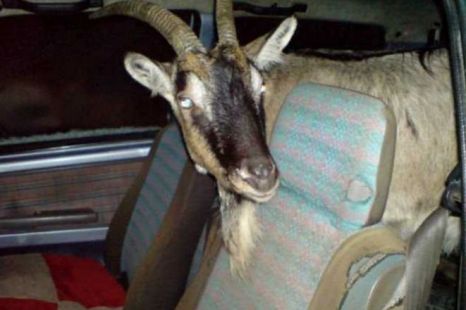 Goat’s Busted
On Way to Tryst

God “The Sex Machine” Goat has been known in Kretzyn, Poland, for his voracious libido. His friends say that for the most part, he’s a nice guy, who enjoys grazing in moderation and loves afternoon naps.
But then suddenly, he gets into a funk and every farm fur and feather is fair game to him. The other night, it was no different. Enraptured with the beautiful Goatzilla, who lives on the other side of a nearby hill, God thought he should pay her a night visit.
No one knows how he convinced a local farmer to drive him to the place, but when the cops stopped them at 3 AM, on a dirty road leading to Goatzilla’s farm, God tried to hide under some blankets in the back seat. They were not having any of it and took him to jail. This time, though, he was not alone: his friend, the driver, got arrested too with three times the legal limit of alcohol on his blood.