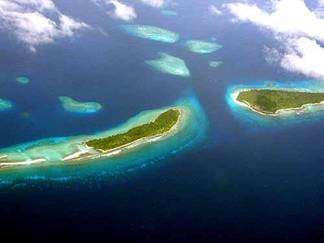 The 29 low-lying coral atolls in the Pacific Ocean that make up the Republic of the Marshall Islands, have a history that goes back four thousand years. The Micronesian nation was named after an English captain, hosted U.S. WWII battles against the Japanese and nuclear tests, and was ruled by a succession of European powers. It finally became a self-governing country in 1979.
It’s now the first one risking to disappear for good, under the threat of rising sea levels. Its 60 thousand plus inhabitants are running against the clock so it can also be declared the first nation to exist without a piece of land, in case it does go under.
It’s a complicated matter, involving fishing rights, offshore mineral resources, and a seat at the UN. A mere 20-inch rise in sea level would drown at least one atoll. A bit more than that would render any agricultural land and freshwater supplies unusable.
Another country indirectly threatened by global warming is Bangladesh. So while deniers insist that the alarming climate trend is a fiction concocted by leftists scientists, entire nations are already facing the prospect of having to relocate whole populations or simply cease to exist because of the phenomenon.
Sadly, the U.S. has failed so far to take the lead on this issue, despite the fact that two of its world-class cities, New Orleans and New York, would suffer catastrophic consequences in case of a dramatic surge in sea levels.
It’s no wonder. History is littered with examples of human short-sightness in the face of forces of nature that usually offer a limited window of opportunity to be controlled, and that once unleashed, show no mercy.

It took thousand of years but crews excavating the site of an ancient Roman city recently discovered a set of scrolls detailing a citywide system of defense and evacuation in the unlikely event of a volcano eruption. The city was Pompeii and the Vesuvio entombed not just the scrolls, but also those who’d been dismissing the warning signs for years.