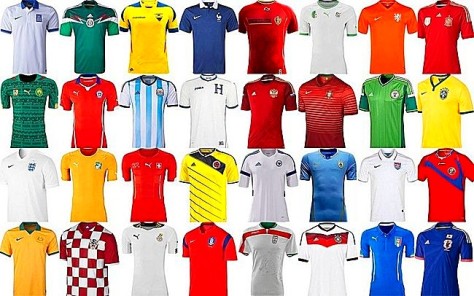 What Colors Does
Your Team Sport?

National sport teams have loose standards when they choose colors for their jerseys. Few people even recall when most of the colors we’re now familiar with, were adopted. But most of them do evoke feelings of support for the home team from the part of its supporters. Something to do with the hue, one guesses.

But who chooses them and based on what? It’s fair to note that the national flag is the usual guidance adopted but we can’t be so sure. Take Japan, for instance, the “Land of the Rising Sun,” which is, indeed, smacked right in the middle of the flag, but what color Japan sports? Blue.
The Brazilian flag is mostly green and yet, Brazil leads the yellow shirt nations, along with Honduras, whose flag is blue and white, Colombia, with its dark blue and red, and two-cups-in-a-row absentees Sweden, whose flag is blue with a yellow cross.
Consider Croatia, for example. Wouldn’t it be much better if it were the colors used by the U.S. instead? After all, it has checkered red and white and blue on it, whereas the U.S.’s is a none too imaginative solid red and blue combo, or a bland white with some stripes. Not to ever be confused with stars and stripes (or the heart they showed on the field), to be sure.
PSEUDO-TRUE COLORS
The Union Jack is white with a red cross, so it makes sense England’s jerseys to be either red or white. Does that explain their dismal performance? You’d better ask their Queen about it. Talking about the missing, what about the Irish green that negates that nice yellow of their flag?
And let’s not get started with the Netherlands’s, whose flag is red, blue and white (sounds familiar?) and nothing like the famous Clockwork Orange of its jerseys. But this year, their dark blue with orange details is quite pleasant, and they seem to be contenders, so let this one fly.
Thus you may realize, by now, that this exercise is completely futile. It’s getting late and we’re going nowhere. And it all could be much worse too.
How utterly boring it’d be if teams wore flags as uniforms. Predictable and demented patriotic. For instance, what if a nation had been ruled by dictators who people had just dethroned from power? Wouldn’t they want to change their flag too? Next time Egypt is in, we’ll ask.
PSEUDO-SERIOUS TAKE
To completely derail any reasoning, let’s bring about the ridiculously unscientific color psychology. You know, the impact that colors have on mass behavior in collective sports. Some associate each end of the spectrum with certain wavelengths detected in the human brain in the presence of certain actions.

Jumping the tracks even further, they somehow relate laborious efforts, repetitive actions towards a goal or industriousness with the infrared side of the spectrum. That’s when a team spends the whole game trying to beat the other through constant, tirelessly efforts. And how their supporters follow such efforts in a crescendo of intensity.
And then there’re those moments when the whole game is decided by an unexpected action, a lucky play, an artful move that changes the whole course of the action. Experts related that to the ultraviolet side of the spectrum. You simply can’t take any of this to the bank, mind you. On the Web, they call it a “young science,” which may or may not mean something akin to pop psychology, psychobabble or some other, more derogatory reference.
PSEUDO-DEEP END
But neither is too scientific the behavior of teams on the field. Or of supporters in the bleachers. Or particles in an accelerator. It’s all very experimental even though the history of mass behavior, or chain reactions, or even peer pressure, have all been documented since records are kept. That’s how it seems like trying to determine the outcome of a game through the teams’ jersey colors; one may expect the same rate as accurate as winning the lottery. Twice. If you do get it right, it may seem as if you knew all along that you were betting on the right horse. If you, as millions every day around the world, get it wrong, say, six days a week, at least you’re a bit more realist about your real chances at getting rich that easily.
Even though that, deep inside you, you know all along that you must wear that lucky jersey if you’re to have any chance at seeing your team winning the big game. Just in case. As they say, I don’t believe in witches, but that they exist, there can be no doubt.
PSEUDO-MAKE UP HUG
Red or blue, white or yellow, it’s not exactly the color what drives players to exchange their jerseys at the end of a game. A common habit that apparently came about out of spontaneous admiration, it became an obligatory institution with a pseudo-hidden agenda.

It’s still looks nice seeing the same players who along 90 minutes did everything they could to humiliate, cheat, distract and, ultimately, beat each other in the game, coming to an embrace and the exchange of jerseys. The late sportscaster Howard Cosell used to say something similar about boxing, like, oh, now he’s about to hug the same guy he’s just tried to kill. Really nice.
But if it’s not a completely sincere gesture, it’s not an outlandishly cynical one either. It’s just a ritual regulated by issues of admiration, convenience, personal gratification and, maybe, self-interest. After all, possible lean times ahead may make a famous soccer jersey handy on eBay. The family of an Italian soccer player who exchanged his worthless jersey with Pelé in 1970 after the World Cup final in Mexico City, has reportedly made some dough our of its public auction.
PSEUDO-ECO FRIENDLY
Finally, a soccer jersey these days has also an

intrinsic value as an example of political correctness. The Nike ones being used in Brazil, just like the ones in South Africa four years ago, were manufactured out of recycled Pet plastic bottles in a nod to ecological concerns but also as a significant piece of public relations.
Such jerseys usually belong to the clubs not the players and thus may carry its environmental statements whenever they’re exchanged. But it’s not too hard to imagine some very famous player, with a penchant for a “bling bling” mentality, having his handcrafted out of some valuable mineral, say, blood diamonds, and wear it like a more valuable artifact than the trophy his team is pursuing.
A jaded and somewhat rot view of the current state of affairs of competitive soccer today or just the fruit of a sick imagination? It’s worth invoking, though, every time the discussion veers toward some rich player’s virtue, the arguable power of certain colors over others, or an alleged gesture of corporate generosity.
________
* Originally published in June, 2010.

One thought on “Color It Splash”