BRAZIL’S OUT OF WORLD CUP

THIS JUST IN: After a thoroughly rational analysis, experts concluded that Brazil’s oust of the World Cup in South Africa is the sole responsibility of one superstar: Mick Jagger.
Tweeters provided copious proof supporting the theory: Right after the Rolling Stoner was photographed with Bill Clinton applauding enthusiastically Team U.S.A, Landon Donovan and Cia. suffered the goal by Ghana that sent them packing.
Next day, he showed up to watch the English squad and England went down in flames.
And finally, for the definitive argument, they caught the Glimmer Twin picking Brazil as the winner of its match against the Netherlands. That was right before Wesley’s header reached the Brazilian net and the Samba Kings had also to book an early flight home.
That’s truly unforgivable, specially right in front of his Brazilian born son, Lucas. No wonder they’re now calling Mick the Angel of Death.
Thus, Brazilian fans have come up with a fitting punishment for such a jinx maker: Sir Mick can’t get the satisfaction of watching the Seleçao play from his high-priced stadium box. Ever. Go and praise Argentina, they say.

They fought and fought. They came back heroes not once, not twice, not just three or for a fourth time in a row. If digging from that hole a fifth time proved to be too much today, even for such a bunch, if anyone ever could, they would be the ones to do it.
And they did show they could, no question about it. For they’ve worn their heart on their Jerseys’ sleeves in a way that was lacking in many a champion who played this cup and shall remain unnamed.
They may’ve fell short this time but they were never beaten. For if that fifth hole proved to be too much this time around, their sheer will won’t allow itself to be buried in it, no matter what.
Their chewing-nail nation will never stop screaming U-S-A. Their opponents will never ceased to be impressed. It’s just so happens that the gods of this game are like schoolyard bullies and known to have crushed many a steely country who dared to dream above their rank.
They’ll be back, though, you can bet all your bad referee calls on that. They’ll keep coming back until they’ll cross that bridge and torn that fence and get to the finish line as if they always belong there.
For that’s the way great champions are crowned. Today’s heartbreak is tomorrow’s path of glory. They already belong there. Whatever is there, they’ve already earned. Well done, team U.S.A., and thanks for the thrill.

Hey, it could’ve been… (But thanks anyway, Mr. Green). 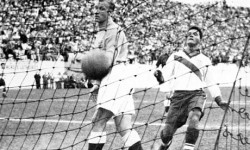 But if it did…

A Weird Football
Or Just a Footnote?
Players have been complaining about the Jabulani, the ball being used in this World Cup, since before it started, and FIFA finally acknowledged there was a problem with it, but not before it took its sweet time to do it. Nothing new about that. Players and coaches say it’s too light. It changes directions too abruptly. It has a mind of its own.
As there’s nothing new either about complaints of sweatshop practices in the underpaid industry that’s been manufacturing balls for the World Cup since the time of Puskas and Di Stephano. Unfortunately, that’s something else FIFA may take its time to address. Unless, maybe if one of the children now working for those abusive enterprises grows up and becomes a labor leader. Or a soccer hero.
But back to the Jabulani. The thing about such a high tech ball is that it has, er, one too many moving parts. But Adidas should know a thing or two about it; it’s been making them for the World Cup since 1963. So, as in every edition of the tournament, it has considerable, not yet completely tested improvements.

eight three-dimensional panels, spherically moulded from ethylene-vinyl acetate and thermoplastic polyurethanes, with a groove-textured surface to improve aerodynamics. It was developed in partnership with researchers from the Loughborough University, U.K.

Heavy stuff for something users are accusing of being too light. But no one expects them to talk much further about it. Once it’s rolling, not even U.K.’s Robert Green will have the energy to blame it for blunders that may happen during expensive, global competitions as well as on the impoverished streets of the Third World.
So, for as much as people need to find new stuff to talk about when the ball is not rolling, this particular fact may remain what it always was, i.e., a tiny footnote that won’t change the course of the competition any time soon.

But it’s something else that FIFA won’t be able to ignore much longer before addressing it, along with the need for some kind of instant replay to clarify controversial referee calls, which this edition of the cup already had far more than its share of it.