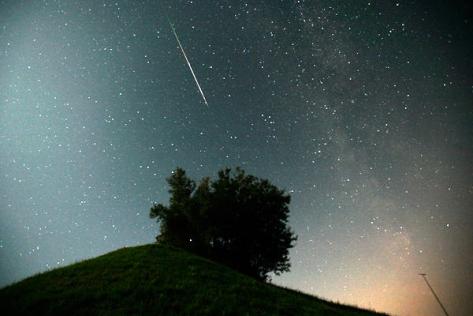 You’d been planning it for weeks. Your Evite list is full of confirmations. You’d even decided to open that case of upstate New York wines, so to celebrate the occasion. Plus all the research, the knowledge to impress your friends, the scientific jargon you’d prepared to pepper your explanations about the celestial phenomenon.
All for nothing, apparently. The annual meteor shower will be seen everywhere but on the South Pole and, you guessed it, New York City. No, climbing the Empire State Building, which will be open until 2am, won’t help it. The glare of the lights in the big city, they say, is too intense. And you thought you were never find yourself complaining about that, eh? So much for the stars that live in the city and all that. Besides, the weather forecast is for clouds and thunderstorms ahead.
The Perseids, known as such since 36 c.e. because it appears to originate in the constellation Perseus, happen when the Earth crosses the orbit of Comet Swift-Tuttle and material left by it rams into the atmosphere. This year it’s on schedule to be highly visible, along with Venus, Saturn and Mars, because the moonlight will be minimal in the next couple of nights.

In Alabama, it’s already caused an impression. A fireball six times brighter than Venus was seen hurtling through the atmosphere a week ago, at 134,000 mph, until it burned up 56 miles above Macay Lake. Astronomers considered it as a kind of opening salvo of this year’s show.
But you’re out of luck. It’s time to move your movable feast indoors. There’s always the Internet to see what you’ll be missing. Or future showers, if the budding astronomer in you cares to wait. The best ones yet to come are the Draconids, on October 7 and 8, the Leonids, on the 17th, and Geminids, December 13 and 14, all either happening on moonless nights or easily observable after the moon sets.
Or in a year from today, of course. All in good time. Just don’t expect to see the comet up close anytime soon: it takes 130 years to orbit the sun.