simple recycling power projects are helping restore our faith in human ingenuity and the feasibility of alternative sources of energy. An experiment in Oxfordshire, England, is turning human sewage into power for 200 residences. And a dog “poop converter” was used to light up a park in Cambridge, Massachusetts, for a whole month.
Both projects use bacteria inside specially designed tanks to breakdown human and animal waste and turn it into biomethane, an odorless gas that serves as a potent fuel. Since this is a brilliant but quite old technology, it’s fair to ask: Why it’s still not developed in large scale, powering our cities and driving the multinational oil monopolies out of business? Oh, that’s right, that’s why. 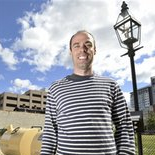 Did we mention that this is a renewable, non pollutant and, when done right, absolutely safe source of energy? It’s incomprehensible that it remains chronically unfunded in the U.S., blatantly ignored in congress, and mercilessly mocked by the media. It’s actually inexcusable that the Obama administration is not on the lead of any effort to adopt this system in a global scale.
But on the other hand and above all, it’s absolutely infuriating that oil giant BP‘s has yet to show exactly how it plans to improve the safety of its multimillion dollar projects in the Gulf of Mexico, even after it caused the worst environmental disaster in history. And that’s still collecting tax breaks on its way to record profits, even while it fights to renege on most of its reimbursement responsibilities.
It’s may not be by chance that the concept of alternative energy is already being packaged as massive and expensive enterprises, such as giant wind turbines or sophisticated electric cells. Maybe those same monopolies are already jockeying behind the scenes for domination of these markets, when time is ripe.
The more accessible approach, though, may lie closer than we think. In the “power of pee,” for example, to invoke another imaginative application for organic waste as source of fuel, already being experimented with in Ohio. Or the recycling and processing of algae. And so many other possibilities, coming to think of it.
Progress, though, has been painfully slow. The Cambridge idea’s been discontinued. And the Oxfordshire’s experiment is, by design, restrict. As a notorious 1970s tennis champion would put, amid his customary angry bursts of unbounded energy: You can not be serious!

Error: Twitter did not respond. Please wait a few minutes and refresh this page.