Woman to Preside Over Brazil

spooky surprise and 190 million Brazilians elected President Lula da Silva’s protegee from the Workers’ Party, Dilma Rousseff, as the country’s first female president, in today’s runnoff. She won with an estimated 56% of the votes, beating Social Democrat José Serra without the endorsement of Green Party’s Marina Silva, who came in third place in the first round, a month ago.

A VOTE SEEN AS ENDORSEMENT OF

LULA AND SUPPORT FOR HIS POLICIES

Rousseff, a first generation Brazilian who survived cancer, and a former guerrilla operative who did time imprisoned by the militarydictatorship that ruled the 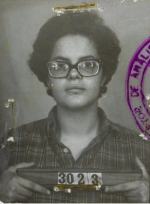 country from 1964 to the early 80s, was Lula’s Energy Minister and Chief of Staff. Despite lacking his charisma, a fact that’s been pointed out to exhaustion by the media, she’s navigated relatively unscathed through several corruption and financial crisis that cost their party some of its most expressive leaderships and no small amount of credibility.
Chief among those left along the way are José Genoíno and José Dirceu, political activists who like her went into hiding and exile during the dictatorship but had to leave the government amid scandals.
BUSY FUTURE AHEAD
The other female presidential candidate, Marina Silva (no relation) came in third place in the first round, but did help her Green Party to increase its national profile. Her leadership is largely expected to present alternatives to the country’s structural problems, along, and sometimes in opposition to, Serra and his party’s ever increasing legislative representation.
Issues such as education, criminality, urban violence, environmental protection, including comprehensive policies to the Amazonas and for state-run oil company Petróleo Brasileiro (Petrobrás), among others not completely addressed by the Lula administration, will surely galvanize the next electoral cycle.
In addition, Brazil is slated to host two major international sports competitions, the World Cup in 2014 and the Olympics Games, two years later, which will necessarily forced it to update its aging infrastructure and forge at least temporarily some new alliances between the federal and local governments in order to succeed.
Rousseff, who unlike

Lula, is known for a personal style that can easily be characterized as “abrupt,” may have a difficult time negotiating with a notoriously uncooperative legislature, and is expected to even preside over the unravel of some of PT’s most beloved programs such as the Bolsa Familia, a much-reviled social program for low income families, and other populist policies it enforced in this past eight years of rule.
CONTINUITY AND CHANGE
A fundamental issue that may become a huge point of contention is the central bank’s independence and autonomy to formulate monetary policy. Many credit the bank to Brazil’s unprecedented economic stability of the last half dozen years, mainly for the unwavering conduction of its president Henrique Meirelles, who may not last too much longer on his post after the election, beyond his expressed commitment to Rousseff.

Transparence and inclusion of the political process, greater support to alternative energy policies and a much more aggressive approach to eradicate extreme illiteracy and its nefarious consequences – increased urban violence, dispossession of great swaths of the Brazilian society and the unchallenged power of druglords over ever-expanding shantytowns – are daily life irritants for the country’s citizenry and, critics say, issues PT’s failed spectacularly to address.
But even the most vicious critics of the ruling party’s indiscriminate use of its political machine to perpetuate itself in power, will admit that Rousseff’s election is still a step ahead toward Brazil’s grandstand ambitions to become a global power in control of its invaluable natural resources and continental dimensions.
QUESTIONS ABOUT LULA
As the country’s consolidates its still young democracy, and divergent political forces jockey for greater representation, one overall consensus in and outside its borders is that much of its present high global profile is due to its economic stability and pragmatic trade policies.
It remains to be seen how Rousseff will manage to impose her own brand of government, specially when choosing her cabinet and ministry, and whether Lula will fade to the back or remain a kind of looming, haunting shadow, ready to come back to power at a moment’s notice.
But it’ll depend on the ability of

Brazilians themselves to organize social and politically throughout the country, to better exercise their grip on their own destiny. For such a perceived sunny constituency, one still attached to the cliché of “samba and soccer” loving populace, there’s much ground to be covered.
As Brazilians reaffirmed today their faith in the democratic process, it’s also ultimately up to them to decide what they want their country to grow into and how to go about getting there, and how soon. For if the U.S. recent experience is of any instruction, the fate of a nation at any given moment goes way beyond the particular skills of its leader, however charismatic he or she turns out to be.