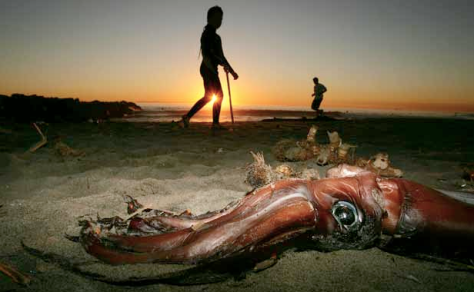 Despite extensive research, and the suspicion that noise pollution has a lot to do with it, the reason why whales, dolphins and other marine species beach themselves to death remain elusive.
The odd phenomenon, which has been recorded since Aristotle times, has been attributed to a number of causes, from increased human activity, to shifts in deep-sea currents to geological changes in the seabed. But none of them has been considered a determining factor.
The

picture is clearer when it comes to squids, though. Recent experiments have proven that noise does affect the physiology of cephalopods and in many cases, lead them to beaching.
After thousands of squid washed up along the shores of Spain, in 2001 and 2003, and Oregon a few years later, biologists concluded that the deaths were most likely related to the presence of vessels using seismic air guns for geophysical prospecting of the seabed.
But the definitive study was done at the Technical University of Catalonia. Biologists exposed 87 individuals of four different species to short sweeps of relatively low intensity, low frequency sound between 50 and 400 Hertz.
When they examined the animals’ statocysts – fluid-filled, balloon-like structures that help these invertebrates maintain balance and position in the water, they observed hair cell damage within it. Over time, nerve fibers became swollen and, eventually, large holes appeared.
Thus, higher levels of noise pollution would cause even more severe acoustic trauma. That would affect the animals’ ability to hunt, evade predators and even reproduce, as well as lead them to mass stranding.
Now the quest for marine biologists is to determine how and how much noise pollution is capable of impacting the entire web of ocean life and how widespread and invasive is sound pollution in the marine environment.
Accordingly, other aspects of such research may one day help explain why every year thousands of cetaceous beach themselves to death. It’s possible that such incidents are more frequent than with squid due to wider migration routes and more frequent exposure to human activity.
Whether mass stranding of whales, dolphins or squid can be, at least in part, attributed to our own making is not exactly the point, though. For either way, it’s still up to us to determine and help minimize such puzzling phenomenon.
For coastal dwellers, for example, there’s nothing more baffling than watching hopelessly while thousands of giant, magnificent creatures die on the shore. That is so because by the time they reach the beach, it’s already too late to do anything about it.