Most people have thought about it at least once. Some desperately needed and had help achieving it. Others, not so much. The desire and/or need to disappear from the face of the earth is often a serious possibility to consider for some of us.
As in, I wish I could just vanish right now. Or, what if I’d drop everything and move to, say, Africa, and started anew, absolutely unknown to anyone I meet? (oblivious to those left behind, too). And then there’s, of course, those whose deeds were of the criminal kind; collaborating with authorities is the only way to survive, even if it involves shedding their former selves to escape the wrath of some mafia.
The reasons may be many. And so are the people who’re trained to find anyone, including you, no matter where you’d try to hide. It’s a disturbing reality of these Internet times, the interconnected world where everyone has once known something about everybody else.
Meet Frank Ahearn, a professional “skip tracer,” who used to be in the business of finding people for creditors, family, spouses, former bosses or P.I.s. Or simply for those trying to have a rare first edition returned to them from some forgetful party guest, circa 1964, who never called back.
Ahearn switched sides, now, who knows why: he’s just published How to Disappear: Erase Your Digital Footprint, Leave False Trails, and Vanish Without a Trace. With someone with such a record, our recommendation is, if you’re really serious, he’s your guy.
Speaking to 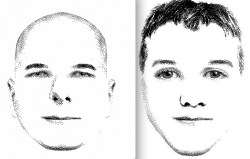 CSO, a security consultancy site, he talks about two kinds of reasons people may want or need to disappear: for money or the threat of violence. Knowing something can also be very dangerous.
But he doesn’t seem to be the type who beats about the bush. One of the topics of his own Web site is Help Create Deception, which could be said with a wink or a murderous facial expression.
It’s one of the strategies he recommends, for example, to neutralize the onslaught of social networks which, with the generous willingness of practically everyone, is turning even your innermost secrecy into a indelible stamp of your life as an open invitation for anyone to pry upon.
This kind of counter-guerrilla can be very effective to diverge the attention of those seeking to find you. It’d be far from being useful to explain why you would want to vanish, though, if you were neither pressured to do it so for financial reasons nor for fear.
One interesting thing is that this whole talk about the business of do it away with oneself has almost nothing with the idealized movie version of it. On the silver screen, people not just slip through the grid at will. They hide in plain sight and even create secret superegos for themselves. And for the F.B.I., tracing someone through their digital fingerprint is a cinch. A few strokes and they’re on their way to catch evil. Almost as simple as reverse engineering.
Neither such a professional way of helping someone vanish has much to do with the tragic dimension of those that go missing. Everyday thousands of people, mostly young, get abducted, kidnapped, killed or, in the rare occasion, adopted by better people than their own parents, and if we’re not directly related to them, all we’re left with from them is their mugs on a milk carton. No way to imagine the grief those who love them are sentenced to carry for the rest of their lives, a fate often considered worst than knowing that they are indeed dead.
In reality, for those who are simply tired of living their current lives, creating other, alternative versions of themselves may be taxing. For someone who’s already cutting against the grain, it’s something else that will need to be disposed of in the future. In other words, if your reasons are of the existential kind, perhaps Ahearn should not be your first choice.
Not that we know anyone to recommend to you, from the top of our head. The business of disappearing is much harder to undertake if the reasons that one would want or need to do it are, well, not of a business nature. A shrink, maybe, but remember, even them need to report to the authorities if there’s a threat of illegality somewhere lurking about. Thank that to the Menendez brothers.
But everything indicates that, as the social networks become more and more pervasive into everyone’s lives, Ahearn and others such as him have been kept very busy indeed. Maybe studies in the future will put it all into graphs.
They would show the rising curve, where most people work hard to become famous and known by everyone on earth, up to the point when all of that changes, and they need to plunge to the depths of oblivion and pronto. As with everything, it’s very likely that the process speeds up as we go and those 15 minutes are more likely a minute and a half today.
Or not. Ahearn is a professional because he knows well both sides, no need for ethical grandstanding about it. People who long to disappear are not professionals per se, but are certainly aiming for a discreet, radical change of venues.
About us, the most that can be said is that we’re amateurs, in the Italian sense of the word: we love this stuff. Professionals? Not really. That’s for anthropologists, who’d understand this whole business of fame and infamy very well. Why? Quick, call an anthropologist.