The late Carl Sagan may have said, we’re all made of starstuff. But deep down, what we really are is a multitude of microorganisms, 100 trillion of them, some part of our natural physiology, but most totally foreign. We wouldn’t have lasted this long on Earth without them.
While cells are the bricks that form our bodies, even before birth, an ever growing, self-renewing, array of microscopic creatures call us their home and, gasp, may also call the shots about everything we think we are, from how healthy or moody, to when we’ll finally expire.
So much for freewill. This invisible trillionaire community, living off our so well washed and fed bodies, shelters charitable organisms which allow us to survive what would’ve killed us in the past, and downright lethal pathogens for which there’s no defense. And yet others are content to just control whoever we follow on Twitter.
To learn about these entities, simple but formidable enough to erase a city’s population, is to find multiple new questions to every doubt we may clarify. It’s also to wonder how come a brainless, single-cell being can play such a complex role in the evolutionary ladder.
Notice that we hadn’t mentioned viruses till now; we figure too few would that eager to hear about them once more. But if bacteria can be foreign to us, viruses are totally aliens as they have no cell or internal structure. All killing’s done with the thinnest protein layer and a string of nucleic acid. We’d let those dogs lie for now, if we could.
Bacteria, however, can actually be our allies, and our guts hold enough of them to actually defeat an alien invasion, as H.G. Wells‘ illustrated so well in War of the Worlds. Not for long, though, as we overuse antibiotics, which kill both good and bad ones, and give rise to a new breed of superbugs. Watch out.

IT COMES FROM INSIDE YOUR CAT
Research is not new, but it goes along with the same M.O. displayed by the parasites we’ve mentioned, except that this time, the joke, er, the zombies may be us. The Toxoplasma gondii infects domestic cats via their food, and can manipulate certain cells to gain access to the central nervous system of a human.
Since the protozoan can live in many environments but survives only in the guts of cats, evolution may have given it a surprising edge. It’s been proven, for instance, that once it’s present (more)

in the brains of rats, it makes it to lose its ingrained fear of felines. The result is predictable: they get eaten, and fast.
From cats to humans, it’s just a leap. A Sweden’s Centre for Infectious Diseases study showed that, when the parasite gets in contact with white blood cells of the immune system, it makes them secrete a chemical neurotransmitter that violates the natural barrier protecting our brain. Once inside, like a Trojan horse, it unleashes its deeds.
It gets worse. Toxoplasma infection has been linked to depression, guilt, and insecurity, in humans, not cats, that is. And another study found that infected Danish women were 54% more likely to attempt suicide – and twice as likely to succeed – with the risk positively increasing at par with levels of infection.

WHO’S IN THE DRIVER’S SEAT?
You may never look at your furry friend the same way again but have in mind that he’s a carrier, not a doer. At the same time, many more studies have proven that rates of depression and suicidal thoughts are actually lower for people who have pets, including cats, compared to those who do not. So don’t kick her out of bed just yet.
Yet, a new study on germs published on the journal BioEssays, jumps at just this exact possibility, that some bacteria do makes us crave some foods out of their own selfish evolutionary drive. And if they manipulate us through food, what else can they make us do, wear socks with sandals?
Again, back to the natural world, researchers have already noted that some fungi – whether one pronounces the word correctly or not – are instigators of certain behaviors in ants, through infiltrating and changing the chemical makeup of their brains, even though it’s still unknown how they do that.
And it’s long known that dopamine and serotonin, chemicals that our neurons use to communicate with one another, can be produced by bacteria living in our gut. They can, ultimately, alter the biochemistry of our brain, and from then on, we’re toast, and as good as mice, and do exactly as we’re told (by the bacteria). 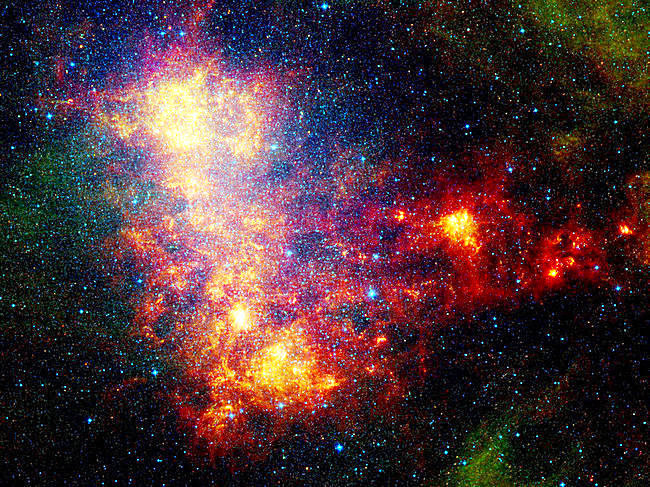 STARDUST? MORE LIKELY STAR BUGS
It all sounds almost as scary as sci-fi had warned us that the brave new world would be. Or there must be some kind of lesson in here, somewhere, about the small controlling the big picture, the same way as the planet’s biggest creature, the whale, is fed by one of its tiniest, the krill. Or something to that effect.
We’re not about to end this with a flowery metaphor about the grandiosity of it all, our infinite ignorance, and all that. It’s actually a wonder that we even know a bit about the world around us, being in such a hurry to destroy it as we are.
But there is one big, fat, blatant fact about the microbiome that envelops us from before birth to way after death: we can never say that we walk this Earth alone.