One Bridge For Sale, the Train
Savant & the Churchyard Sheep

Self-confidence is the New York currency. That’s why stories about the city and its citizens are borderline hyperbolical, lest no one be accused of being meek. No wonder; with 27,000 people per square mile, one needs all the distinction they can muster. Even if involves tall tales.
At least, eight million of them, as the 1948 classic Naked City claimed. Then as now, all are outstanding. Heard the one about selling the Brooklyn Bridge? Or the guy who went to prison for stealing the subway dozens of times? But fear not, the sheep are coming back to town.
Big Apple; city that never sleeps; top of the heap. New Yorkers are so fed up with slogans, sobriquets, and movies about their town being destroyed. Specially since it’s now far from the lawless wasteland some still expect from it. Just don’t try to sell cat hair, of course.
But urban myths about sewer alligators, or rats the size of cats, die hard. And so does the belief that residents are rude – they’re not, Ok? gotta a problem with that? – or getting rich just by mining the streets. The thing is, the real New York stories are much better than these.
So, yes, you hear this place is the greatest of this and greatest of that, and self aggrandizing is a competitive sport. But you’d better back up what you say or you’ll get your behind kicked before you can say, trump. As for that orange sleazyball, don’t worry: we’re working on it.

ONE BRIDGE IN GOOD CONDITION
Speaking of con men, and dealers who can’t close a deal, there’s a New Yorker who truly may’ve been the greatest of them all, or at least, one of the first of a long line of pretenders and liars: George C. Parker. Yes, he did ‘sell’ the Brooklyn Bridge at the turn of the 19th century.
Not once, but twice a week, for 30 years. He was not the only one to try, but seemed to have beaten the competition. His scheme even inspired the Mae West‘s 1937 vehicle, Every Day’s a Holiday. By then, no fraudsters of that ilk were still alive, only their legacy.
It’s survived to this day in the Nigeria‘s sudden riches Internet hoax, and, somehow, in the U.S. presidency. The set up, and the bill of goods involved, may change, but two core elements are still around: snake oil salesmen, and the gullibility of get-rich-quick believers. 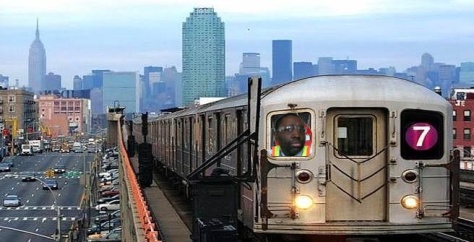 THE SAD TALE OF THE TRAIN MAN
Darius McCollum may be many things: impersonator, trespasser, lawbreaker. He also has Asperger’s syndrome, and his feats flared up New Yorkers’ imagination – hey, his train was always on schedule. But one place he does’t belong to: Rikers Island.

And yet, he’s spent half of his 52 years in prisons like that. His deed: invading the subway system and conducting the train, without working for MTA. Or missing a stop. He did that many times since he was 15, and also tried his able hands on LIRR trains and a Greyhound bus.
Many believed he should’ve gotten the job that’d have saved him. Instead, the agency with an ugly record running NYC (more)
_______
Read Also:
* Play Dough
* A Tale of Twin Cities
* Sour Apples

underground trails, threw him in prison. As most autistic people, his fate‘s uncertain. Darius dared to dream. But his dream jumped the rails, screeching. Maybe we all deserve the Summer of Hell we’ve just had, just for that.

WHEN THE SHEEP COME TO ROOST
New York is about tall buildings, yellow taxis, and arguably, pizza. It’s also about sheep grazing peacefully in an old churchyard. Come again? For the past four years, the Old St. Patrick’s Cathedral has ‘imported’ the munchers to trim its lawn the natural (and cheapest) way.
The three ewes will spend six weeks ‘lamb-scaping,’ before being taken back to an upstate farm. It’s indeed a soothing sight, if one considers the view of roaches, bursted garbage bags, and police barriers, shoved on our sore eyes everywhere. Highly pettable too.
The bridge, the savant, and the sheep. Not exactly ‘only in New York’ material, but still, a pleasant study in contrasts, the kind this city never lacks. In the 1948 gritty Jules Dassin movie, that also inspired a long-running TV series, the famous line comes at the end. Now, those stories would be almost nine million; these are only three of them.