The schooner that brought the last 110 Africans to be American slaves, in 1860; a boxcar that carried many of the millions of Jews to Germany’s Auschwitz extermination camp, during WWII; a boat that sunk in the Mediterranean in 2015, killing over a thousand migrants.
For their riders, hope for breaking chains, breathe freedom, or find a future, was yanked out of their reach. But even stripped of their dignity, or forced to renounce name and identity, their lives were not wasted. Now, more than ever, they must be known by all.
It’s an intriguing coincidence. The Clotilda, a slave ship just-found in Alabama; a cattle car used in the Holocaust, being exhibited in Manhattan; and the rescued wreck of the Barca Nostra, on display at the Venice Biennale, are sharing a meaningful moment now.

Slavery. Racism. Xenophobia. Neither vanquished, as believed, nor gone. As their murderous spell threatens the world again, it’s timely that all three vessels have been given a new life as beacons of memory and resistance. History is not made to be repeated.
Some are weary of attributing to objects the significance of the pain and suffering experienced by actual human beings; it risks dehumanizing them further. But it beats forgetting it all. It jolts people out of complacency, and gives them agency over the immovable past. 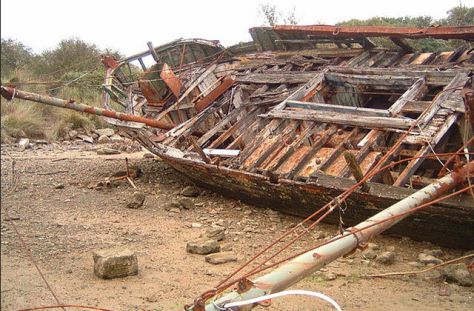 THE LAST SLAVE SHIP, BURIED IN THE MUD
The story of the Clotilda, the boat that transported kidnapped West Africans to Alabama, is well known. The last slave ship to reach the U.S., at the dawn of the Civil War, it was among other things, breaking the federal ban on ‘importation,’ in effect since 1808.
To avoid being caught, after delivering its heartbreaking cargo, the captain burned and sank the boat. But in a generation, the then former slaves founded Africatown, and helped build this country. They did not forget, though, and now there’s proof for the stories they’ve heard.
The discovery is worth being part of the national conversation about the black African-American experience, just like Reparations for Slavery, and prison and drug reforms. All are about giving people and their stories their due acknowledgement and place in history.

THE SINISTER CARGO OF NAZI TRAINS
In America, circa 2019, when a white supremacist goes in a rampage, killing Jewish people, or another Latino child dies at an immigration facility, the president gives the first a nod, and ignores the other. No wonder that there’s been quite a few of both lately. People of a certain age know how this winds up.
Auschwitz, at

the Museum of Jewish Heritage, a show about Germany’s biggest concentration camp between 1940-1945, features a railcar just like the ones Nazis used to ship thousands of Jews and others to gas chambers. But it teaches more than that.
Hate and murder are the stock and trade of psychopaths in power, but they rely on forgetfulness to come back again. If the murder of six million is no longer (more)
__________
Read Also:
* The Journey
* Floating Enigmas
* Second Variety

a deterrent to racial intolerance, perhaps telling the Holocaust story in greater detail – with props – may as well be.

THE REFUGEE WRECK THAT SHOOK THE WORLD
Of the estimated 1100 who boarded in Tripoli, Libya, the beat up Barca Nostra, in 2015, only 28 made it into Catania, Italy. The rest went to the bottom of the Mediterranean, along their capsized fishing boat. Most bodies were recovered then. The ship, a year later.
Now, artist Christoph Büchel brought it to Venice, to much grief and some criticism too. As wrecks like these still happen, even if with less casualties, it’s even worst that xenophobia is on the rise. As in the U.S., some seem deluded that closing borders will make it all go away.
In fact, many countries send armed flotillas to meet them halfway and turn them down. But war and climate crisis are bound to drive more refugees and asylum seekers to risk life and limb in the high seas. Guns won’t change that; a new, more equitable world order just might.

2 thoughts on “Vessels of Tears”