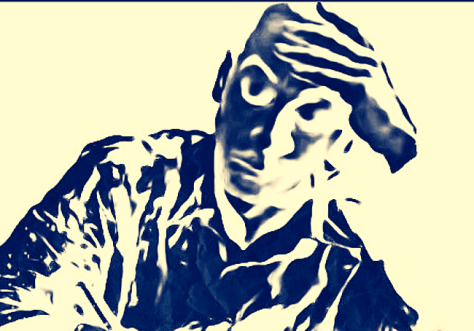 The disturbing news that readers of this blog are about to receive now may be a shock to some. Others will simply throw their hands up the air and say something like, I knew it. Yet, the great majority, the real target to which new stories are published on this space every week, those, well, they couldn’t care less, and probably won’t even noticed anything unusual.
Still, we feel that it’s our duty to let you all know that the writer of these posts, the person to whom we’ve created a public profile, with an avatar and a proper username, has gone missing. We’re out of words. Literally. Seriously, we ourselves couldn’t write a single sentence even if our lives depend on. But we’ve looked everywhere and we simply can’t find the author.
See, since its inception two years ago, Colltales has had an agreement with this person – let’s call him ‘WC’ – and it goes this way: in exchange for food and drinks (no alcoholic beverages), board but not heat, and a walk in the park every once in a while, WC produces a story every day, which can be a completely original or a comment on the world of wacky and odd news, animal reports, unusual sights, etc.
Thing is, lately WC’s been very inconsistent. Often, when we come to collect the story for publishing, WC’s not around, or haven’t finished it, or has to be coached out of bed. Since we absolutely don’t want you, our faithful reader, to be disappointed, we sometimes lose it, we’re very sorry to say. But so far, despite some shouting and shoving, we haven’t failed you, have we?
It always works, or it has. If one positive thing can be said about WC – and believe us, there are not many to report, and don’t even let us start with matters of personal hygiene, attitude or even common courtesy – is that, even if at the last minute, he’s always provided us with something, heaven knows how, that pops out right when we’re already a bundle of nervous about to commit some despicable act.
Often, since WC doesn’t type or couldn’t even begin to understand how to use Word (we’ve tried is, but the laptop wound up cracked on the floor. Don’t ask), the writing is, let’s say, poorly presented. (more)
_______
Read Also
* The Untamed

The paper on which it’s written is always stained by what we, wishfully, hope is just butter or jelly; there are often missing pages that we may find ripped or crumpled about the room, the handwriting is that of a five-year old, a truly mess.
We must say though, in our own defense, that we’ll stop at nothing to bring you these stories, even under distress and at a great personal cost, which includes risk of serious body injury, or even of being arrested, when we get a bit too carried away. What can we do? We need the content, and WC knows very well that this agreement, signed with blood, is for life, period. No excuses, no exceptions.
To be honest, we very much doubt WC has any concept about what it all means, of course. But we won’t stop at anything on your behalf, reader, and we very much hope you understand the meaning of what we’re telling you. WC’s been a very inconsiderate collaborator, but we won’t have any of it, even it forces us to do things we’d rather not discuss.
And now WC’s missing. It’s already 3:38am (really), we’re in this dampen room that smells of, oh let’s not even get there, and there’s no sign of anything new written anywhere. We’ve searched all over and all we could find were half-eaten pieces of the pizza bought last month to celebrate we’re not even sure what, lots of dirty clothes, really, we’re disgusted.
We even found some shards of that rare signed picture of soccer great Pelé, that we went to great lengths to get it so to reward WC for a particularly inspiring post (don’t ask us which, we don’t read them; they actually bore us to death), and had to smash all over WC’s head, when there was a threat that what’s finally happening now was going to happen then.
So, we’re at the end of our rope here, dear reader, and we very much hope you understand. It’s been very difficult dealing with WC on a daily basis and we feel that there’s been very little acknowledgment of our efforts and commitment. It’s almost as if we, the ones who put the whole thing together, don’t really count, and we tell you, dear reader, that just hurt us a great deal.
Anyway, we’re going to kill, er, we need to convey to WC that one can’t renege on commitments that, granted, were agreed upon under great distress (we still think that we shouldn’t have used that antique Chinese torture chair, but be it as it may, what else were we supposed to do?), while WC gets all the credit for being ‘witty,’ and ‘insightful’ and ‘original’ and all that.
It makes us sick to our stomach that here we, with the best possible intentions, nurture and nourish this less than able human being, providing the platform and all the basic comforts anyone would need to strive and do something out of their lives, and WC just goes and spits on his plate and walks away and left us to explain what we, obviously, are in no position to do.
What is WC thinking, that piece of volcanic ash stuck under the shoe of the burnt-to-cinder victim, just before diving face first into the gaping mouth of incandescent lava? We’d tell you what exactly we plan to do with WC, if we were sure there wasn’t any under-aged inanimate appliances sitting right next to you. We’re even afraid of what we may do with this empty bottle of Jack Daniels.
We should leave this fetid room and get some sleep, but that would be utterly irresponsible from our part, and someone has to be the adult here. This was a bad idea from the start. What were we thinking? Deep down, we knew WC would never live up to our high standards, and we should’ve walked away from that fine mental facility and never looked back.
We’re stuck. How can it be possible we’re approaching the 1,100 word count mark and there’s no sight of a post for tomorrow’s edition? We’ve already searched our files for some Caturday picture, but who’s supposed to write the story? We do have a few items about bananas, of all things. Perhaps we could assemble everything together. But there’s no really way of doing it without ripping someone else’s writing. It wouldn’t even make sense. Oh, wait, we hear some noise upstairs.
***
Dear reader, we’re under WC’s bed. We can see his filthy shoes from where we are. Please don’t make any noise. Oh, no, he’s drunk again. We feel like getting out and smack the little bastard around real hard. But it may be better to hold on and see if there’s any paper shuffling or pens being picked up from the can at the desk. We don’t know, gosh, this is killing us.
We’ll give WC a few, see if there’s any sight that our agreement will prevail and there will be a new post tomorrow. Because, if it doesn’t, we honestly don’t know what we’re capable of doing at this point. Being butchers by trade, we do have a tool box, back at the car we’ve parked on the street. Let’s hope it doesn’t come to that. Check back in the morning and good luck to us all.