To Scare Witches? For Sure.
Worst Year Ever? Not Even Close

The thing about reruns is that they rewind our enthusiasm. That is, if there’s any left. We’re about to hit the homestretch of 2019 with no winners in the fastest lane. It’s looking pretty grim from the inside and the toxic dust may choke us all before the finishing line.
Now, for those about to call this a terrible year, since it’s really been the worst so far in many areas (See Emergency, Climate et al), we must invoke another, one that got ‘all this’ started in the first place. It’s been a tight race but our money is still in 2016.
And that’s that fib about rewinding, that it makes it all look rosier. ‘Hogwash,’ as Robert Hughes once told me about authorship challenges on Goya‘s final works. It’s been three years since and it’s been a hell of a nightmare. All over. World out of whack and all that.
It did get worse with few redeeming qualities. But the funny thing is, it feels perversely better if compared to the year that spawned the Rotten Orange and killed heroes by the dozen. Remember? Yes, there was that, as a radioactive cherry on top of the crapcake.
______
Read Also:
* Heard That?
* Call Upon You?
* Gone With Goya

So for no reason at all, except a few implied above, it’s as good a time to repost as any. As if reaching back into Hades to gain strength for the year’s final push. It goes fast now, and the once fun holiday season is about to hammer us into submission with its sales pitch.
So grab a beverage and enjoy the syndication.

World Indicts 2016 For
Crimes Against Humanity

We found it. For a while, it was as if another year would’ve gone by and we’d be still at lost finding the source of the world’s ills. Not this time. 2016 has been universally named the evilest on record. Now we can all go back to our business of turning it all worst that it ever was.
It started deceivingly like any other year, but not for long. Looking back, by March it was clear that there wouldn’t be a contest, but some were still hesitant to make such an early call. Now there’s hardly anyone disagreeing about the choice. Well done everybody.
Here are, in no particular order, the Top 10 Counts brought forth against 2016, whose powerful punch has managed to beat to a pulp some of history’s most notoriously perverse, and blood-thirsty, years:
1. Failure to interrupt and/or reverse rising global temperatures, and resulting increased glacier melting, wildfires, and extreme weather.
2. Neglect to interrupt, minimize, or do away with the harrowing intensity of the era’s ever more numerous wars, carnage, and mayhem.
3. Criminal extermination of countless animal and plant species, some of which we may never have even known they existed.
4. Inability to promote a healthy, all-inclusive, comprehensive worldwide discussion of 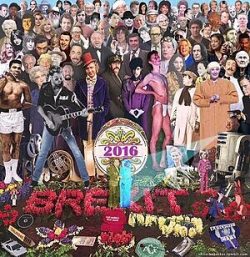 ways to improve the well being of humankind.
5. Incompetence to prioritize the fight against inequality, boosting instead the prospect of a parasitic minority to grow even wealthier.
6. All-time record for excessive casualties of well known, excellent human beings, who made the world a better place.
7. Creating conditions that conspired and befell female world leaders from positions of power, replacing them with corrupted males.
8. Relentless persecution of races, social strata,

and ethnic groups, with special cruelty towards the poor, blacks, and non-white faiths.
9. Rehabilitation and promotion of hate speech and discriminatory ideologies, charged for past genocides, to the mainstream of society.
10. Shameless persecution of fact-based common truth and reality, and advancement of false theories and fake news for profit.
As we said, for a moment it seemed that we’re making the same mistake we’ve done over and over again: choosing the wrong scapegoat to blame for our disgraceful lot in life. But experts and analysts agree, all evidence does point to the malodorous 2016.
So pleased to finally lift the burden off our shoulders, we almost didn’t notice the password to access the following year: worsen.
Weren’t you glad when 2017 finally hit the deck, ready to swing? Here’s to the happy new year it may have been to some.